Sources from The National Archives, UK

From invasions and civil wars to revolutions and revolts, explore a rich period of Middle Eastern history.

The Middle East in the 1970s was characterised by its conflicts, with a cast of political figures whose influence can still be felt today. Providing an invaluable resource for researchers and students seeking to understand the modern Middle East, this collection contains complete runs of Foreign Office files, providing an expansive view of key events and their global political impact.

Users can explore the Arab-Israeli War, Henry Kissingerâ€™s â€˜shuttle diplomacyâ€™ and the historic Camp David Accords that followed. The resource also examines internal conflicts, such as the uprising in Dhofar, the military coup in Cyprus, the Lebanese Civil War and the Iranian Revolution. Energy concerns dominate this resource, with reports on the oil policies of Saudi Arabia, Kuwait and Iraq, and how price hikes, embargoes and industrial strikes affected the G8â€™s energy supply and economy. Additionally, users will be able to scrutinise policies on international arms sales.

Foreign Office Files for the Middle East, 1971-1981 is part of Archives Direct, a cross-searchable multi-product platform, sourced from The National Archives, UK.

The following foreign and commonwealth office file classes are included in their entirety:

Foreign Office Files for the Middle East 1971-1974 brings together files from the UK Foreign Office, Prime Minister's Office, and the Ministry of Defence and makes them available ......
Read full review

The functionality of the interface is od tn par with other digitized document archives, and the collection can easily be browsed and searched

Visited Sep'16 - This first module-focused on the Arab-Israeli war and the early 1970s, to be supplemented by two additional modules covering the Lebanese Civil War, Camp David ......
Read full review 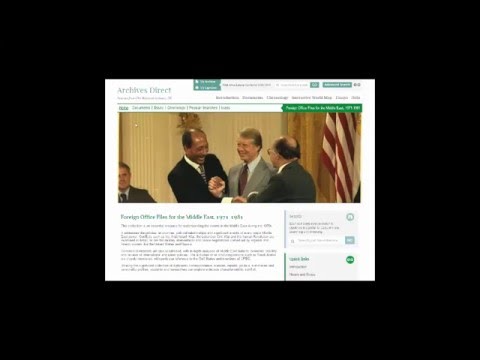